Russian Film Week, like the Eastern-European films it shows, runs at an absurdly frustrating, devil-may-care pace (at least for this New Yorker). Screenings of sweeping 160-minute epics often begin an hour late, which admittedly comes in handy if you show up at the School of Visual Arts on the east side instead of the SVA Theater on the west side, as too many of us confused movie-goers did for a sold out “Anna Karenina.” But if you’re willing to brave the stampeding, Russian-barking crowds at the entrance, followed by a sponsor-thanking trailer, followed by a live sponsor-thanking Russian, followed, of course, by the English translation, then by a gratitude-spewing director (or five or six if you went on the sold-out opening night), then by that English translation, to finally see whichever film you’ve by now forgotten the title of, you might just catch some meaningful cinema.

To read the rest visit The House Next Door.
Posted by Lauren Wissot at 7:08 AM No comments: 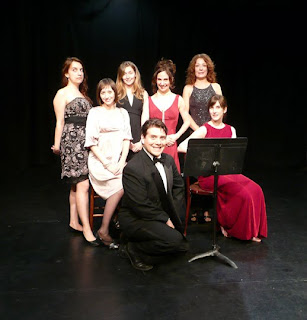 A. A setting forth of meaning or intent.
B. The presentation of information in clear, precise form.
C. A public exhibition of broad scope.

D. The title of a stealthily hilarious “theatrical collision” directed by Michael Gardner and written by Matthew Freeman along with their pitch-perfect seven member cast (eight if you include The Couch, which got its own bio in the program, though I doubt it did much writing).

And letter D is all of the above and then some, and tonight it concludes its quick three-day run at The Brick Theater in Williamsburg, Brooklyn. The one hour show is rollercoaster comedy for the Dada crowd, a series of fun sketches in which the actors dressed in eveningwear as if for a Bunuel dinner party make small chat like aliens inhabiting human form, dialogue often overlapping and repeating as in a musical composition. “I squatted and peed on my own desk,” one actress declares in a “Saturday Night Live” Coneheads cadence. “To this day I believe it’s the most amount of blood that ever came out of my body,” a smiling tux-clad actor brightly chirps 50s TV sitcom style in fond recollection of his first car accident. (“And then I thought, ‘There’s another person in the car with me,’” he later adds, followed by, “No, that’s the person from the other car.”) There’s a tantalizing chemistry between the show’s director and its playwright who together make great use not only of the sparse black box stage, but also of the uncomfortable silences stretched to the breaking point of hilarity. “Why are we the only two people here?” an actor wonders even though there are six thespians onstage. Between the body language and emotions that don’t connect with the spoken word, and the words that don’t connect with any semblance of (staged) reality there’s enough in “Exposition” to make even the most cynical surrealist cheer.
Posted by Lauren Wissot at 3:30 PM No comments:

Beyond Queer: "The Lily's Revenge"

Once upon a time, there was an entity called community. It evolved out of the retro notion that people needed one another both to survive and thrive. It began with blood ties, since in the old days most of the support network around an individual happened to have a biologically-related component. But as people ventured out of these clans and the world became more global, communities became more fluid. Those whose blood ties fell short of support suddenly began to band together to form new families. These new outsider families were given labels—Beat, hippie, punk, queer—and often overlapped in their membership. But then a strange thing happened. As those communities grew, they began to splinter into ever more niches until identity suddenly required the individual to choose sides against oneself and family. Were you a lesbian first and a black woman second? And why would a black lesbian set foot in a white gay male bar? Where once there was a GLBT community that felt unrepresented in the media and in society at large, there's now a queer silent majority reeling from the over-saturated mainstream images of a cookie-cutter gay life they don't conform to or recognize at all.

To read the rest visit my “Sex Beat” column at Carnal San Francisco.
Posted by Lauren Wissot at 1:14 PM No comments: 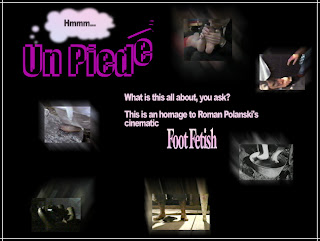 Mark your calendars for the west coast edition! Our “Un Piede di Roman Polanski” will be screening Saturday, November 21st as part of the Best of CineKink/2009 Shorts Sampler program. Stop on by!
Posted by Lauren Wissot at 6:44 AM No comments:

The End of Poverty?

Due to its timely subject, Philippe Diaz's “The End of Poverty?” — a 35mm indictment of the colonialism that led to the free market system, that led to our current global economic catastrophe, that led to the onslaught of documentaries rushed into the marketplace to blame it all on the system that funds them — was invited to premiere at Critics' Week at Cannes before it was even finished. Which is an odd choice given that the financial meltdown in itself has already personally and viscerally brought home the shamefulness the film addresses, essentially neutering Diaz’s straightforward explanatory doc.

To read the rest of my review visit Slant.
Posted by Lauren Wissot at 4:49 AM No comments:

Sexual Violence and "The New Guignol"

My most delectable Halloween treat last week was attending “The New Guignol,” an evening of short, ripped from the perverse-but-true headlines plays presented by The Blood Brothers and Nosedive Productions at my new haunt, The Brick Theater in Williamsburg, Brooklyn. Of course a Grand Guignol show, theater's answer to a haunted house, is pretty much critic-proof, akin to reviewing a night of campfire tales. Either you delight in the horror – which I unequivocally did – or you find yourself nodding off anxious to crawl into the nearest sleeping bag. (I was especially fond of the patter and chemistry between “blood brother” actors/directors Pete Boisvert and Patrick Shearer, who served as our Uncle Fester looking guides through the simultaneously gory and hilarious vignettes.) Acting, directing, sets, lighting and costume design are mere accompaniments to the spectacle of body parts and stage blood, and savoring that which is taboo in proper real life.

To read the rest visit my “Sex Beat” column at Carnal San Francisco.
Posted by Lauren Wissot at 1:30 PM No comments: