Guy Maddin’s thrilling, ingenious “My Winnipeg” is a love letter to the Canadian director’s hometown disguised as a Buñuel “escape from the bourgeoisie” comedy. Like a guest at a never-ending dinner party, Maddin (who narrates the B&W, MOS film) is plotting to finally leave the comfort of “snowy, sleepwalking Winnipeg,” the city of his birth—the city he’s spent his entire life in—but must fight the unseen magnetic forces that are keeping him there. Fortunately, unlike Buñuel’s clueless characters, Maddin has a secret weapon—he’s a filmmaker. “What if I film my way out of here?” he proposes.

Visit The House Next Door for the rest of my review.
Posted by Lauren Wissot at 2:06 PM No comments:

“It Is Not the Homosexual Who Is Perverse, But the Society in Which He Lives (Nicht der Homosexuelle ist pervers, sondern die Situation, in der er lebt)” is the earnest title of Rosa von Praunheim’s 1971 PG-chaste first feature, which has aged like good cheese from a scandalous sensation (a political wakeup call to gays) into a textbook example of classic camp—and a delightful time warp trip through queer cliché. The very colorful color film (shot MOS) opens with von Praunheim’s camera trailing two fags—one blonde, one brunette—walking down a sunny Berlin street. Daniel, the shy brunette, is new to the big city and blonde Clemens is generously offering him a place to stay. (We know this by the heavily German-accented English, dubbed and spoken in a “Sprockets” cadence.)

To read the rest of my review visit The House Next Door.
Posted by Lauren Wissot at 7:20 AM No comments:

Pie In The Sky

When Philippe Petit – the lively Frenchman who executed the “artistic crime of the century” in the summer of 1974 by sneaking up to the top of the World Trade Center and, for nearly an hour, performing a high-wire act without safety net or harness—was taken into custody and charged with trespassing and disorderly conduct, reporters immediately shoved microphones in his face. “Why?” they wanted to know. “Why did he do it?”

“Why? That is so American to ask why,” Petit answers in James Marsh’s poignant documentary “Man On Wire,” inspired by his autobiographical account “To Reach The Clouds,” and which takes its name from the words listed on the police record under 'detail of complaint.' “Here I do something magnificent and beautiful and people ask why,” he continues, gesturing his frustration. “There is no why!”

But there is a review at The House Next Door.
Posted by Lauren Wissot at 7:03 PM No comments:

The Truth Will Set You Free

“Constantine’s Sword” is Oren Jacoby’s intriguing documentary exploring the “dark side of Christianity” through the spiritual and physical journey of James Carroll, a journalist, award-winning author (his book “Constantine’s Sword: The Church and the Jews: A History,” forms the basis of the film) and former Roman-Catholic priest, whose father was a three-star Air Force General responsible for the creation of the OSI. It has the feel of Errol Morris directing ”The Da Vinci Code”; like Morris, Jacoby is more private investigator than filmmaker, probing both the depths of an Auschwitz survivor, a cemetery caretaker’s eyes, and the overwhelming majestic grace of the Vatican with the same penetrating lens.

To read the rest of my review visit The House Next Door.
Posted by Lauren Wissot at 9:12 AM No comments:

When any kid with a DV cam and Final Cut Pro can shoot to become the next Tarantino, why is it surprising that any blogger with Internet access will aim to fill Ebert’s shoes?

While the excessive amount of “assholes with opinions” technology generates is annoying, the “preaching to the converted” bubble that most critics belong to is equally annoying. Often paid critics (other than populists like Ebert) – like academics – aren’t speaking to the general population. Let’s face it. No one in a shit-kicking town in Texas gives a fuck about “Film Comment” – or even the “NY Times” for that matter. And the elitist “Well, we don’t care about those philistines anyway,” attitude regularly emanating from the cinephile chorus does just as much harm to cinema as the recent mass purging of paid film critics from newspapers. Roger Ebert is famous and will continue to make a living from his writing not because he’s a great critic (which he happens to be), but because he speaks the same language as the vast majority of ticket buyers. That’s democracy in action as well.

Perhaps film critics are finally getting the memo – art doesn’t pay. Those of us who really care about rescuing cinema know that the one sure way out of this democratization/distillation “crisis” is to stop whining, put our heads down and simply do the work.
Posted by Lauren Wissot at 7:25 AM No comments:

When Captain Nemo Docked in Brooklyn

At the end of “Stalags,” Ari Libsker’s engrossing documentary about the Israeli Nazi-themed porn paperbacks that became a bestselling phenomenon at the time of the Adolf Eichmann trial, a survivor declares that the genocide should be spoken about in the simplest terms since the grandest words and images couldn’t come close to approaching the true horror. And Libsker, a grandson of Holocaust survivors, takes this advice to heart through a deft combination of voiceover (lurid excerpts from the stalags read by a somber baritone), archival images of daily life in Israel (mirroring the disjunction between normal appearances and the corrosive truth lurking beneath the surface), and talking head experts—both consumers and creators of the “anti-Semitic porn”—shot in B&W, juxtaposed with cutaways to the stalags’ colorful cover art (perhaps the only sign of life in the “shadow of trauma” that defined the time, each image worth a thousand words and then some). Simply put, this film is a revelation. Like the best investigative journalists, Libsker patiently sifts through each and every contradiction to discover that something that would seem so horrifically paradoxical on its face proves ultimately inevitable beneath the surface. How could Israeli Nazi pornography even exist, let alone be a widespread phenomenon? “Stalags” answers, “How could it not?”

To read the rest of my review visit The House Next Door.
Posted by Lauren Wissot at 8:02 AM No comments:

Charles Burnett’s "Namibia: The Struggle for Liberation," about the country’s decades-long fight for independence from apartheid-ruled South Africa, would make for a great PBS or HBO miniseries. Burnett, an efficient filmmaker with any budget, does his best to thoroughly tell the story of Samuel Nujoma (Carl Lumbly, in an impressively moderated performance), Namibia’s first president and the founder of the SWAPO political movement, along with the many others instrumental to the cause, but simply can’t fit the density of material into a 161-minute film. Unlike a lot of directors (not to mention politicians) Burnett nobly refuses to stick with a “good guys fight—beat bad guys—mission accomplished” scenario. He’s not afraid to get inside the messiness of international and national political games, the covert collaborators who can make the road to independence a journey of two-steps forward, one-step back. Even as Burnett moves swiftly from scene to scene, the mind wanders to what was left on the cutting room floor. "Namibia: The Struggle for Liberation" is a novel unfairly forced to fit the template of a poem.

To read the rest of my review visit The House Next Door.
Posted by Lauren Wissot at 8:12 AM No comments: 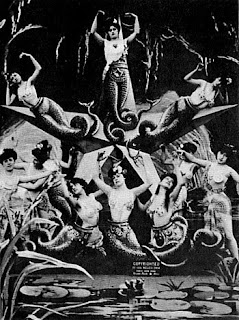 Always wanted to see 20,000 Leagues Under The Sea (1916) performed with “pencilina” and cello? Or Man with a Movie Camera (1929) accompanied by the League of Musical Urban Robots? Or how about Phantom of the Opera (1925) with the “Swiss Army Bass,” “Egotar” and “Fractal Harp”? Well, now’s your chance! Visit Monkey Town April 10-12 for this impressively unique event.
Posted by Lauren Wissot at 9:30 AM No comments: