Better Than Santa: The 12 Acts of Christmas 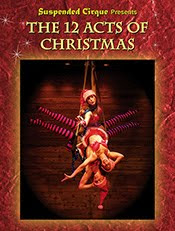 Take a dash of burlesque, a scoop of modern dance mixed with classic ballet, plenty of candy cane-colored costumes, some sultry cabaret lighting, a rocking score stuffed with updated versions of holiday standards, sprinkle generously with vaudeville, then toss it all up in midair and you’ve got “The 12 Acts of Christmas” presented by Suspended Cirque, the sexiest troupe of aerial performers on the other side of the Hudson. I trekked through a blizzard to get to the warm intimate setting of the Galapagos Art Space in DUMBO for the only evening performance of their winter spectacular this year. (The weather outside was frightful but that dominatrix Santa sure was delightful!)

The entire show was one euphoric toy train ride, from its opening winking catfight routine and Santa riding a unicycle on the ground, to “Michelle on Fabric Skating in the Air” and “Angela and her Rope on a Silent Night” high above. There’s a touching, old-fashioned sensibility to this troupe, a reverence for burlesque and vaudeville, for slapstick and flappers. (“Michelle Drunk at a Party” could be a Chaplin routine – if Chaplin were a yogi.) Suspended Cirque combined the bawdy fun of the holiday season with the true beauty in its meaning via ropes, trapezes, sturdy fabric and hoops – not to mention the Peter Pan aerialists whose own bodies manage to defy both gravity and the human form itself. And the childlike thrill these talented folks take in performance is both exhilarating and downright contagious. For them the sheer joy of flying is a calling, and we as the audience are merely being allowed to live vicariously through them, to feel a part of their fantasy made real for a couple of hours. This is nothing less than transcendental performance art. Laced with Viagra.

For there’s a deep rooted sexiness that lies in the mingling of physicality and spirituality, allowing a transcendence of the self. With the dexterity of jungle animals and the enthusiasm of kids climbing trees the company uses each other’s bodies, even their own limbs as ropes, utilizing flesh on flesh to create. As they seamlessly move from floor to ceiling, as if walking on air is the most natural thing in the world, the need to be air born becomes a palpable hunger, an orgasmic drive. There’s a lust for life that encompasses the room. Indeed, watching “The Ladies of Suspended Cirque on the Triangle Trapeze” camp it up in miniskirts and glitter, mock pushing then catching one another from on high to a club mix of “Santa Claus Is Coming to Town,” it’s hard to believe that any dream wouldn’t come true.
Posted by Lauren Wissot at 7:31 AM